Man is a mystery. In our throw-away culture, objectification has become inevitable and our existence disconnected from our authentic nature.  Art is my attempt to create images that reveal the mythic truths of our beings with the purpose of reconnecting to our core selves.

The spiritual has become a great teacher and has spurred me to seek artistic influences from a transcendent dialogue. I seek to reveal images that come from the actual reality that supports our illusion of reality.  As temporal forms become transformed through diligent and diverse artistic practice, the viewer is left with an honest appraisal appealing to our humanity.

Eric Henty grew up in the woods and fields surrounding small suburban towns in Massachusetts and New York. He always felt at home with nature and spent a lot of time outdoors. Every summer, his family would travel into Canadian wilderness and spend several weeks boating, hiking, and fishing miles from other human beings. His grandparents were both artists on his mother’s side, his grandfather having developed new lighting fixtures and instrumental in designing the lighting for the Alamo, and 1964 World’s Fair in NYC. He had worked with Frank Lloyd Wright and said, though he was a brilliant architect, he was “not too practical.”

For as long as he can remember, he was surrounded by art. As a child, he was often a visitor at art museums and galleries where he wondered where the artists had come up with their fantastic pictures. It was here that the seeds of his future as an artist were planted. After attending Colgate where he pursued a liberal arts degree in politics and “Peace Studies”, a spin-off of the 1960’s, he entered the Peace Corps and met a colleague who was a full- time potter of great skill, having learned his craft from a Japanese master. As Henty learned the art of pottery from him, it was his first lesson in creating shape and form in three dimensions. 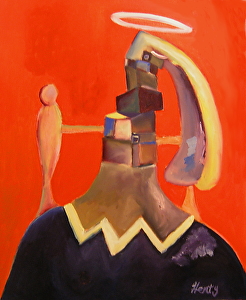 Living on the other side of the world in Micronesia was also critical to his development as an artist. He had become involved with a native woman and according to their culture, was married. While he was still there, she became very ill and when he was with her, she died. He became engulfed in grief and shortly after her funeral, he fell severely ill.  After the Peace Corps quickly transported him back to the United States, he learned that he had been sick with encephalitis, though he had not suffered any brain injury. During the time he convalesced from being ill, he began to seek out other artist’s company and to take art courses at local colleges.

After having several art instructors that insisted that there was only one way to draw or render a painting, Henty stopped taking formal classes and embarked on a more informal education where he felt he could pursue his quest for creating art that was personally authentic and genuine. He found this pursuit to be much more satisfying and tremendously therapeutic.

In the beginning, he created academic art and then began to experiment with materials and delving into self-expression. He bought a small air compressor that powered an airbrush that he used to spray watercolors in layers, building them up on thick watercolor paper in combination with brushwork which resulted in a unique effect and style. One evening while working on the kitchen floor, he was intensely involved in creating one of these artworks, when he realized that becoming an artist was what he was supposed to do. He speaks fervently about this experience. 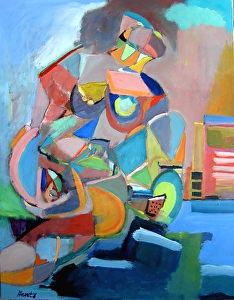 “I had tapped into that unique part of my spirit where whole artworks, like a musical composition, are created.  I turned our attic into an art studio that became a sacred space.” It was here that he produced his first series, oil ink drawings on paper. A local gallery director agreed to become his mentor, and for several years thereafter, he created bodies of work which he then brought to his gallery to be critiqued. Henty has saved these and hundreds of his artworks from this experimental time period where he honed his artistic instincts and sensibilities as an artist. Some of his artworks were sold at gallery auctions, and in local galleries in upstate New York.

When he picked up a paintbrush and began to apply oil colors to the canvas, he continued to search for his own unique expressions. During a depressive period in his life, he painted very dark paintings, mostly which have since been destroyed. This has given him the need to create and seek an independent voice.  He succinctly states his inspiration for creating artwork.

"We live on earth where life is always imperfect. But in spite of this, the world is a magnificent and mysterious place. We often forget this, especially in this day and age. We are immersed in an informational age that draws our attention away from this experience. People are a mystery. So much has gone into making each of us, more specifically, who we are; that is on top of being alive—eating and breathing and all of the bodily systems which operate in harmony comprising life itself which is a miracle. I want my art to express this mystery as a celebration of life and as a way of getting to know ourselves better.

Yes, I know we can learn and grow through difficulties and suffering, but I want my art to give people a lift, a smile, something to talk about, as well as being meant as a source to feed their soul. My intent in creating artwork is to share my artistic vision, with the hopes that viewers will be changed, at least ever so slightly. I believe that art at its best has the power to change how we see and experience the world. If my artwork has the ability to refresh, renew, and revitalize the viewer, as well as reaffirm what it means to be truly human in the finest sense of the word, then it will have accomplished my intent. The times we live in are tumultuous and challenging, and art can be an especially important anchor as our country and world society undergoes great change.” 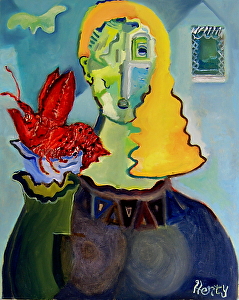 Having married in 1987, he unexpectedly gained a partner in his art career. Not only has his wife, Karen become his art confidant and muse, but she often sits and contemplates on his artworks as Henty creates them at the easel. Their conversations that ensue regarding color, composition and subject matter as well as when an artwork is truly complete are taken into serious consideration. Henty considers her as having a critical role in his development as an artist, implicitly trusting her artistic sensibilities and her skill at critiquing his work.

For the past 15 years, Henty and his family have lived in Brooklyn, NY and he now considers this home. He finds it an exciting and vibrant place to live, taking frequent forays into Manhattan for cultural events. He has found a host of artistic friends to join with and exchange ideas. He has had artwork featured in shows at the Lincoln Center, as well in Soho and Dumbo Galleries. Recently he has accepted an invitation to be represented by the Saphira & Ventura Gallery in Manhattan, two blocks from Times Square.

In addition to creating abstract figurative artworks, he also paints purely abstract canvases.  “I find it a completely different way of working,” he states. “The abstracts have a musical quality for me, and as I reach the final stages of creating a canvas, I actually hear classical music playing in my mind.”  The color, forms, and composition of all of his works make up a distinct body of artwork unique to Eric Henty alone.